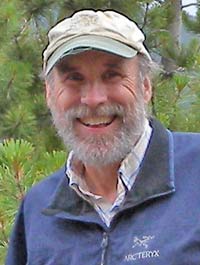 What kind of work do you do?

I create maps that show the distribution and character of soils as they occur on the natural landscape. I also create information about each of the mapped soil types in a database linked to the map. The maps and supporting data are contained in a Geographic Information System. Users of the maps, typically scientists and land planners, are then able to conduct analyses about the suitability of the individual soils for various purposes (most typically agriculture or forestry uses). This particular activity in soil science is part of a sub-discipline called pedology – the study of soils, their natural formation, distribution and their classification. I am therefore a pedologist.

What is the most exciting thing about your job?

Working in remote locations in northern Canada and elsewhere in the world where few people get to visit or work. I really enjoy field work that involves camping in wilderness areas and hiking about to explore the ecology of these areas. Soil scientists often work in multi-disciplinary teams, typically with vegetation biologists, wildlife biologists, geologists and hydrologists to describe the ecology of various study areas. The soil scientist in the crew is the one who usually works hardest ☺, digging soil pits, usually to a metre in depth to examine the soil properties on a site. After digging the pit, the soil scientist then must describe and classify the soil in technical terms and sample the major soil layers called ‘horizons’. After doing this at several locations it can be a heavy load of samples to carry back to camp at the end of the day.

I really just stumbled into soil science. I grew up near the Macdonald (agriculture) campus of McGill University near Montreal. I had little interest in agriculture but the university offered an excellent 2 year collegiate program in science which I was interested in. Once at McGill I stayed on campus and completed a B.Sc.(Agr) degree. My major was in agricultural meteorology but along the way I took several soils courses which I enjoyed, but never thought of it as a potential career. That all changed when I moved to British Columbia after graduation and ended up in Williams Lake. The BC Forest Service needed someone to help conduct a soil survey in the Cariboo Mountains and my couple of soils courses was enough to land a summer position. Once in the field I knew it was the right fit for me. I later went back to school to do a Masters degree in soil science which set me up for my career. As it turns out, most of my work has been in forest and tundra environments, I’ve worked very little on agricultural soils. In fact, my favourite soils are those affected by permafrost. Soil science has allowed me to work in permafrost environments all over the world!